The growth of EdCamp in recent years is a positive sign for education, as teachers take a greater interest in peer learning and networking. The do-it-yourself and get-what-you-need ethos of EdCamp isn’t going to replace all formal, planned professional learning, but it can exert a healthy kind of pressure on the PD establishment and top-down administrators. But then, the more the EdCamp idea spreads, the more potential there is that it evolves in ways that stray from the original model. The post takes up the EdCamp portion of the recent California Teachers Summit, reaching up to 15,000 teachers on the same morning.

This blog post, re-posted from my EdWeek Teacher blog “Road Trips in Education” (8/17/15), was based on an EdCamp San Francisco Bay Area conversation about the future of EdCamp. Little did I know that the next day, the EdCamp Foundation would announce a $2-million grant from the Gates Foundation. So questions about the future of EdCamp are even more appropriate now. I’m cautiously optimistic. Read on for more details.

In my last blog post, I questioned a recent policy report that seemed intent on exaggerating the expense and ineffectiveness of professional development for teachers. My doubts about that report shouldn’t be taken as a disagreement with the premise that teacher learning could be more effective and affordable.

I think the education establishment could learn something from the EdCamp movement, which has energized thousands of teachers around the world with a model that makes at least some teacher learning fun and free. The EdCamp model works largely because it’s voluntary, and puts teachers in charge of their own learning. 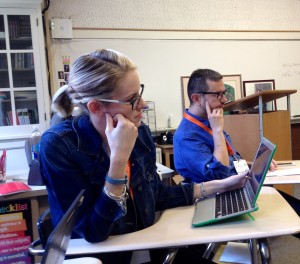 Sara Boucher and Val Mendes in conversation about the future of edcamp, at EdCampSFBay, 8/15/15.

The premise is simple. A group of educators who are interested in organizing an edcamp choose a location – typically a school – and invite educators to come talk about and learn about whatever topics interest them and suit their needs. There is no set agenda – just time and space for sharing. The first half-hour or so is reserved for participants to suggest topics to discuss. The organizers place those topics in certain rooms at certain times, and there you have it: an instant education conference that is built around the interests and needs of the participants. To keep in line with the origins and ethos of an edcamp, organizers must keep it free of charge and open to anyone interested, space permitting. Participants are encouraged to change from one room to another if a session isn’t holding their interest or meeting their needs. Edcamps typically are not part of formal professional learning: they do not issue certificates, track people’s attendance, confer credits, etc.

The idea of edcamp has become mainstream enough that some schools and districts are borrowing this approach for portions of their own professional development time. On a much broader scale, the state of California embedded edcamps within the California Teachers Summit – a one-day, free conference occurring on July 31, simultaneously convened at over 30 colleges and universities around the state, involving 15,000 participants. Video feeds allowed everyone to see two keynote speakers statewide, and additional speakers gave “Ed Talks” at each site. There was also an introduction to EdCamp and a mini, 2-session edcamp fit into the day’s agenda. I attended the summit at San Jose State University, where a show of hands indicated that perhaps 10-15 teachers out of 600 had prior experience at an edcamp. I heard from other teachers who attended at other sites that there were similarly low numbers of teachers who knew about edcamps before the summit.

So this could be seen as an edcamp win – huge exposure for the idea, huge new potential to start edcamps, bring educators into edcamps, and make the edcamp model part of school and district approaches to professional learning. And yet, for edcamp “purists” this might present a challenge: what happens to a grassroots movement as it grows and evolves? There were some elements in this “edcamp” that were not part of the usual approach, such as designated facilitators in each room, and certificates for attending the summit. And what does it do to the general understanding of edcamp when you attempt a massive one where almost no one involved has direct experience with the concept?

As an edcamp enthusiast who has attended and organized edcamps, these questions were on my mind as I attended the fifth annual EdCamp San Francisco Bay on August 15, so I proposed a session on “The Future of EdCamp.” The people who came to that session were mostly edcamp veterans, including three members of the EdCamp Foundation Board of Directors: Kristen Swanson, Kristina Peters, and Karl Lindgren-Streicher.

I took notes on the conversation, and found that overall, we were sitting with questions and exploring paradoxes. Kristen asked, from the foundation standpoint, if it’s possible to make edcamp a larger and more accessible movement without losing the bottom-up, grassroots approach? Can the foundation and current edcamp enthusiasts intentionally grow the movement and still keep an ethos of self-organization? Karl was wrestling with contrasting impulses to keep edcamp small and try to expand it. He has often expressed the feeling that whoever shows up for an edcamp, “the right people show up. We don’t need ‘Big EdCamp.'” In other words, on any given day, it’s the people who are present who make up the edcamp, and their experience will be uniquely theirs. And yet, Karl seems to feel that we do need more people to join in the experience, to diversify the crowd and just maintain current engagement levels as some people inevitably drift away from edcamps. Still, while growth would be nice, Karl is not as worried about the specific model as much as the underlying principle: “I don’t need everyone to go to EdCamp; I need everyone to be empowered about the direction of their profession.”

Suggestions for how to grow edcamp included outreach to teacher education programs, and to established professional organizations and conferences. The tension remained however, regarding what happens to the model as you push it out to others with different ideas, people who might alter or marginalize edcamps as we know them. As principal Greg Land put it, “Can we connect to institutions without institutionalizing?”

Sara Boucher, who came to this edcamp from Nevada, shared concerns about the possibility that institutions might alter the “edcamp” model too much, using the name, but putting specific requirements in place for a specific set of participants. Having organized an edcamp prior to attending one, Sara is enthusiastic about the approach: “It just comes together and I don’t know how. It’s magical.” But then, she did let on that part of the magic is having a strong professional learning network online.

Another element of the magic, according to Kristen Swanson, is that organizers can’t have a “Plan B” if the edcamp seems in danger of stalling: “You have to put it all on the participants and trust in them; let them know no one is going to take over.” As edcamps have scaled up, there have been occasional missteps in that regard, and Kristen has communicated with some organizations about their interpretation of “edcamp.” However, she was careful to note that “most people who are doing [edcamp] in a way we don’t want are just not realizing it. They’re used to traditional approaches. I approach it as an educative situation” – and she has found other organizations are open to that education.

Kristen also stated that she doesn’t see this as a competition between professional learning models: the large conferences and professional organizations are not the villains and edcamps the heroes. Rather, it’s a matter of having options that suit the needs, tastes, time-frames and budgets of individuals. But the bottom line is, “I want every educator in America to believe there’s as much value” in autonomous approaches to professional learning. Every teacher should believe “I have something to share, and sharing it will make others better, and make me better.”

One thought on “What is the Future of EdCamp?”