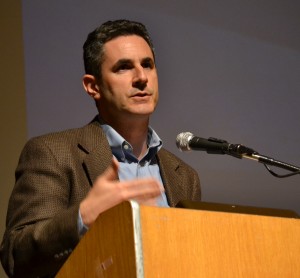 I am a National Board Certified English Teacher, on the staff of Palo Alto High School’s English Department since 2002. Outside of school, I serve as Vice-President of the Palo Alto Educators Association. Some years ago, I helped launch and co-directed a teacher leadership network called Accomplished California Teachers (ACT). That experience gave me opportunities to learn about and work with teachers from all over California. Having worked with a variety of other networks and organizations, and having built relationships with individuals and groups throughout California, I spent the 2014-15 school year traveling around the state to gather materials for a book about excellence in California public education, titled Capturing the Spark: Inspired Teaching, Thriving Schools. I’m also a contributing author in the collection Best Lesson Series: Writing.

Any recent blog posts I’ve written will be here, though they’re becoming less frequent. You can find plenty of older posts on my former EdWeek Teacher blogs, Road Trips in Education and at Capturing the Spark. And if you really want to go back a more than few years, check out my posts at InterACT. There are also some blog posts published on The Standard – a group blog from the National Board for Professional Teaching Standards (NBPTS).

Since my teaching career began, in 1993, I’ve mostly taught in California public high schools. I’ve also taught middle school grades in two independent schools. I completed a B.A. in English at U.C. Berkeley (’91) with Phi Beta Kappa honors, and earned a Master’s degree in Education through the Stanford Teacher Education Program (’95). After achieving National Board Certification in 2004 (renewed 2014), I served for two years as a support provider for National Board candidates and Stanford’s National Board Resource Center. When the NBRC became the sponsoring organization for ACT, I was one of the founding members, and helped author the group’s two policy reports. In my role as the Associate Director of ACT, my main responsibilities were in communications and membership, supporting our mission to promote teacher leadership and amplify teacher voice throughout the state. Our activities included teacher leadership trainings, panel discussions and film screenings, visiting legislative offices, organizing a policy forum in Sacramento, and publishing a group blog. Over the years I’ve also been active in other educational leadership efforts including CTA’s Institute for Teaching, the California Teacher Union Reform Network (CalTURN), and the Collaboratory at the Center for Teaching Quality.

I’ve authored over 225 blog posts at InterACT, and more than 50 for EdWeek Teacher. Many of these blog posts have been reposted by the National Education Policy Center, along with others at The Washington Post’s Answer Sheet blog, the Shanker Blog, and Larry Cuban’s blog, and quoted in the Los Angeles Times online. Guest blog posts have appeared in EdSource Today, Thoughts on Public Education, and the Shanker Blog. In addition to blogging, my articles on teaching have appeared in Teacher Magazine and EdWeek Teacher, England’s TES Magazine, and Brazil’s Profissão Mestre. Additionally, I have authored or co-authored opinion pieces for the Sacramento Bee , the San Francisco Chronicle, and the San Diego Union Tribune. In the past five years, I’ve presented at multiple state and national education conferences, spoken in public forums, and facilitated workshops on teacher leadership and education blogging. See my Media, Speaking page for additional information.

My consulting and advisory experience includes formal arrangements with the Gavin Newsom gubernatorial campaign (2018), NBPTS, CalTURN, and the Riverside County Office of Education. I’ve also partnered more informally with CTA’s Institute for Teaching, and Facing History and Ourselves, and I’ve advised regional school board members and other elected officials on various education issues.