In the course of visiting around fifty schools in California this school year, I’ve been surprised at how often I’m surprised. I always have some idea who I’m going to visit and what will be happening at school that day, and yet I never know what will emerge as the most interesting part of a visit. If I were to return on a different day, or visit the schools in a different sequence, I’m sure it would be a different experience as well.

Part of my preparation for this year of school visits included reading the book Trusting Teachers with School Success (Farris-Berg and Dirkswager), and perhaps it was that title that sparked some of my reflections in the past week, as I visited schools and teachers who trust students with learning success. 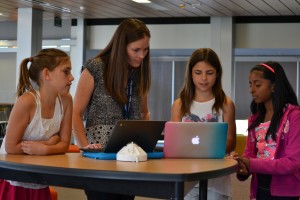 It started when I was visiting a brand new school in Poway, California. Design 39 Campus (so named because it’s the district’s 39th school) received plenty of attention when it opened (local TV news, KQED Mind/Shift, Grant Lichtman) and I approached the visit with some understanding of what I would see there. I knew about the background of the school, what it looked like, how it was structured differently from most schools. But what turned out to be most interesting to me on that particular day was the immense trust in the students.

I spent the day with teacher Kelly Eveleth, and at some later point I’ll have plenty of positives to share about the teaching and learning in multiple classes I observed. But at a time in the morning when a typical school would have a bell ringing to begin recess, Kelly checked in with her fifth-graders to see how their work was going, and to sugggest a recess time for the class. When they eventually went outside, they navigated hallways and stairs independently. Some classes were already out there, and recess ended when the teachers felt like ending it. Without whistles, bells, or shouting, the students figured out it was time to get back to class, and without lining up or grouping up, they all found their way back. Lunchtime was handled in a similarly calm and civilized way.

Later in the afternoon, students went to multi-grade level choice activities called “deep dives” in which they can explore a topic or skill of their choosing for twelve weeks at a time. I observed a mask-making class, and at one point in the 90-minute period, I noticed a student walking around with a cordless drill. A small student (the group ranged from fourth to sixth-graders). Kelly noticed too, but said nothing. The student didn’t ask for permission, or ask any questions. He selected a drill-bit, put it in place, tightened the chuck around the drill bit, drilled two holes in a mask to represent the nostrils at the end of an animals snout, removed the drill bit and replaced it in its case, put the drill away, and that was that. Kelly had been keeping an eye on this, but was working with another student throughout. Later, I saw two different students, at different times, go over to retrieve a broom and dust pan to start cleaning areas of the classroom. No one had asked them to do this, and Kelly confirmed for me later that no one has assigned cleaning roles. They just do it.

The next day I was in El Centro, California, visiting Southwest High School. With the idea of trust still very much on my mind, I was struck by the respectful political disagreements expressed by seniors in Haydee Rodriguez’s AP Economics class. Their risk-taking reflects trust in each other, and Haydee had to trust them to extend such discussion while maintaining a respectful approach. After lunch, I dropped in to a sports medicine class where students practiced taping and wrapping fingers, wrists, elbows and shoulders, the way they would to prevent or treat injuries. While there was no real risk, there was physical contact, and a lot of peer teaching going on, reflecting the degree of trust in the students, and among them. I also decided to extend a modicum of trust by volunteering to have my wrist taped by one of the students. I concluded my visit in the theater, observing a rehearsal for an upcoming production of Alice in Wonderland. Of course, mounting a high school play is always an enterprise that demands trust in students.

After a weekend to ruminate on this idea, I wasn’t surprised that trusting students continued to be the dominant filter in my observations this week. On Monday I reached the southernmost stop in my school visits this year, at Point Loma High School in San Diego. Jennifer Roberts teaches English there, and also works as an instructor for the University of San Diego; her particular expertise in instructional technology integration often means advocating for student access to more tools, applications, and websites, and naturally trust is essential in the responsible use of technology. A degree of mutual trust was also evident in the interactions Jennifer had with former students who apparently spend many lunch periods in her classroom, where they not only eat, but also converse relatively freely about school and life.

I was back to an elementary school on Tuesday – Murdy Elementary in Garden Grove, CA. Fifth grade again, this time with veteran teacher Camie Walker. In preparation for Earth Day, students had been asked to bring something to school that could be repurposed – the middle part of the “Reduce, Reuse, Recycle” trio of strategies to reduce waste. That was the whole assignment. There were no assignment sheets, no rubrics, no points or formal assessments. (Gasp!). And yet, almost every student brought something in, and many of them were quite creative and thoughtful – exceeding anything that Camie might have suggested they do in one night, she confessed later. Trusting in student creativity is part of Camie’s approach, and similarly, she trusts their curiousity and desire to do good, and so its through guided student discussion and student suggestions that they apply their problem-solving skills to an environmental challenge to help endangered butterfly populations. At each step in this emerging project, Camie declined to provide explicit next steps for student inquiry, but did offer guidance and advice when students brought their own suggestions. 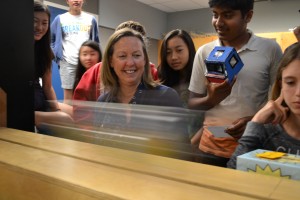 Kathy Marvin’s 8th graders experiment with inertia and momentum, launching a cardboard “car” towards a wall.

And to round out a week of learning about trusting students, I was fortunate to arrive at Jeffrey Trail Middle School in Irvine, CA. Kathy Marvin is a California Teacher of the Year (2010), and I was very much looking forward to seeing her eighth-graders learning about inertia and momentum by destroying some crash-test cardboard vehicles, with eggs in the driver’s seat. That turned out to be as entertaining as anticipated, but I also discovered that her school’s Science Olympiad team (first place in Orange County and third place in the state) was going to organize and run the same kind of competition for eight local elementary schools later this spring. Students are planning the schedule, room assignments, materials, maps and concessions. They’re creating the questions for the written portion of the challenge, and judging the competition in the engineering and design events.

None of these snapshots should be taken as summaries: these same classrooms feature moments of more traditional instruction: writing strategies reviewed, close reading practiced, scientific formulas applied and fractions simplified. But looking at the practices that truly epitomize trust and elevate an academic culture, I don’t find great teachers relying on a teacher’s manual. There’s no script. These are not standardized practices, though they may be align to standards. The teachers are learning as they go, which is a powerful kind of teaching, too. While there is improvisation and uncertainty as the learning unfolds in the classroom, there is absolute clarity about the principles that guide their work. These teachers are looking far beyond students as task-finishers and benchmark-testers. The expected learning results are concrete steps that strengthen students as life-long learners, critical thinkers, creators and citizens.

At elementary, middle, and high schools, there are ways that we can extend greater trust to our students. The benefits of doing so show up in students’ engagement and enthusiasm, confidence and competence. If it strikes some teachers as risky to trust children to this degree, I would suggest, and I think the teachers I visited would agree, that our comfort depends largely on the degree to which we ourselves enjoy the trust of our school leaders and community.

The tricky thing about this kind of trust is that it’s offered before it’s earned. You have to have some faith that if you do the right thing for the right reasons, people who share your interests will meet or exceed your expectations. If they don’t, you adjust, but you plan as if they will. The team that envisioned Design39 didn’t cross their fingers and hope to enroll trustworthy students so they could gradually dole out more trust a little at a time; they created the conditions that made students want to meet expectations, to be worthy of the trust they were given at the outset, and then use it wisely. Similarly the district leadership didn’t make all the key decisions for the teachers, and then start trusting them gradually as a reward for fidelity to the district’s plan; the district created the conditions and provided the resources that enabled teachers rise to the occasion.