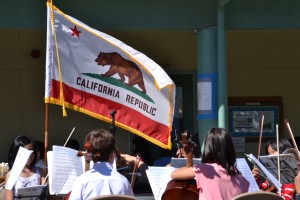 The California capital was a busy place earlier this week: January 5 was the day that new or re-elected office holders began their terms. Governor Jerry Brown made history by taking his fourth oath for that office. I took a detour from my project visiting schools around California (not affiliated with EdWeek) to attend a less historic swearing-in ceremony for Tom Torlakson, re-elected as the State Superintedent of Public Instruction on last November’s ballot. Given the education policy climate in the state and country, there’s a chance that Torlakson’s second term and Brown’s fourth will help bring about some education policy changes that will have a significant and lasting impact on California schools.

What to Watch For

The continuity in state leadership for education means California likely has a chance to see the effects of recent policy changes playing out over a longer time frame, with less disruption. The key areas to watch are:

With more than 10% of America’s public school students in the state, it’s an experiment worth watching, to see if state leaders with unique education expertise, experience, and shared vision can carry out a process they started in the past four years, and provide a model of improved education policy.

The last item in that list, local accountability, is the most interesting to me. Having side-stepped the worst of the Obama-Duncan agenda, California is not simply resisting, but potentially, innovating. Local accountability plans are in their infancy; many teachers and parents are unaware they exist. Teachers and our unions should be seizing the moment, working as partners with district administrators and board trustees, parents and students, to re-examine what schools are supposed to do, and how we evaluate the results. In some districts, this work is off to a promising start, and with continuity in policy and leadership, the state has a chance to make this new approach work for more districts, and perhaps serve as a model for other states.

In Governor Brown’s innaugural speech, he signaled his intent to maintain state policies that support teachers, and resist federal policies that would hinder our work: “Teachers need to be held accountable but never forget: they have a tough job to do. They need our encouragement, not endless regulations and micro-management from afar.” It was a milder version of comments found in other speeches Brown has made on this topic.

In recent years, California has declined to fall in step with key aspects of the Obama-Duncan education plan, mainly concerning the overuse of standardized testing and misuse of test scores. In this regard, Governor Brown, President of the State Board of Education Michael Kirst, and Superintendent Torlakson have been on the same page as they’ve sparred with the Education Department since 2011. When the Common Core implementation was leading us towards the prospect of double testing our students, California passed a law eliminating almost all of the defunct state tests immediately, while the Smarter Balanced assessment was still in a field testing mode. At first Secretary Duncan threatened repercussions, but California held firm and Duncan relented.

Looking into the next four years of education policy in any state is complicated of course; for this year, the wild card is that Congress is poised to revise the Elementary and Secondary Education Act (ESEA), currently better known under it’s Bush era moniker, No Child Left Behind. It remains to be seen if a Republican-controlled Congress can generate a bill Obama will sign, and then how quickly and dramatically anything will change at the state level if a bill does pass. And then in 2016 we’ll elect a new president, and in 2017, appoint a new Secretary of Education.

Meanwhile, here in California, Governor Brown and Superintendent Torlakson can carry out their jobs without concern about re-election campaigns to come. They have a supportive State Board of Education, entirely appointed by Gov. Brown and presided over by an esteemed education policy expert, Stanford professor Michael Kirst. It seems like the perfect time for Californians – teachers and parents especially – to increase their engagement in education policy, at the local level especially. The next four years just might show how a state can dodge the supposedly silver bullets of weaker education reform efforts, and move towards meaningful structural changes that benefit students and schools.

One thought on “State Policies Give California Window of Opportunity”