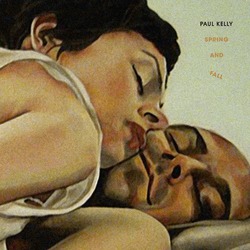 I haven’t added a music post in a while, but on my recent drives through California’s Central Valley, and closer to home in the Bay Area, I’ve been through this CD a few times, and actually listened to the final tracks even more than that. I’m hoping to learn those tunes on the guitar eventually.

Paul Kelly is a national treasure in Australia; he was the subject of a recent full-length documentary film, “Paul Kelly: Stories of Me.” Incredibly prolific and poetic, melodic but edgy at times, his music has been a significant part of my life since about 1991. I have 12 or 13 of his albums. Of the three songs that can move me to tears entirely on their own (not because of my own circumstances while listening), he’s written two of them.

The album Spring and Fall (2012) isn’t quite that stirring, but it’s a beautiful collection of short songs that trace the arc of a relationship, from the optimism and passion of early romance in “New Found Year” to the telling-off in “None of Your Business Now.” The final song, “Little Aches and Pains,” provides a lovely epilogue, putting the failed relationship in a new conciliatory context many years later. Kelly manages to write universal truths with a clever selection of particulars, and fresh images that avoid clichés of both lyric and thought. Great music to sing along and keep a road trip interesting!

Here’s a video for one of the songs on the album, with footage from the making of the album.