This blog post was written and scheduled for publication prior to police shootings in Dallas and Baton Rouge. While those tragedies compound the pain of prior events, and complicate our discussions going forward, I decided to post this at EdWeek Teacher on July 8, as originally written prior to the shootings in Dallas. Those attacks present a new challenge for our society without making it any less important to affirm that black lives matter.

I haven’t watched the videos. Knowing what will follow is too much. I can’t go beyond the still frame, to see these black men, already at the mercy of police officers, receiving bullets instead of mercy, dying on the streets of Baton Rouge and Falcon Heights.

The last time I watched one of those videos, was Laquan McDonald, killed by a Chicago police officer now charged with murder. Before that, it was Walter Scott in South Carolina, shot in the back while running away, and the officer planting evidence rather than rendering aid. Before that, Eric Garner. I can still hear his voice, the desperate truth in his futile shouting, “I can’t breathe.” So, I don’t click the play button anymore, and avert my gaze when they warn a video is graphic and disturbing.

Still, I’ve made a mistake in the past two days. I’ve spent too much time immersed in the online grief and rage surrounding the deaths of Alton Sterling and Philando Castile. I couldn’t turn away from the news itself. I even saw posts about self-care in a time of tragedy or crisis, and the importance of turning away just to preserve your own well-being, and I scrolled right on by, absorbed. (At the end of this post, I’ve collected a few other educator reactions I encourage you to read).

I couldn’t avert my gaze from what my friends and colleagues are dealing with, especially friends who are black. On some level, we all deal with the fear that violence or death can strike randomly. Life isn’t safe. But this violence isn’t random. It is abundantly clear that it is more dangerous to be black in the United States, and the sense of danger must be compounded knowing that encounters with the police can turn lethal without cause.

The violence isn’t new, either. The ubiquity of video cameras and alternatives to the mainstream media have finally made some of us more aware of the problems we didn’t see or hear about in our lives, in our families and communities, or in the news. To the extent that some of us always would have trusted the police report version of events, or distanced ourselves from a victim’s death by thinking, “Well, he should have cooperated” – it is past time to wake up. And apologize.

So, I’m almost done with my blog post. I’ve emoted. I’ve empathized. I’ll eventually pull myself away from the computer and return to daily life. My son needs a haircut and the family needs some groceries. We’ll drive down the street without worries, and I’ll start to feel better. I’ll feel safe. That’s my unearned privilege, the comfort of walking and driving without fear. 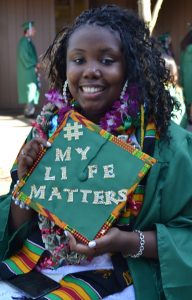 One of my former students, Mariah, preparing to graduate.

I’ve said before that educators must be well-informed regarding race; with our peers and with our students, we mustn’t back away from talking about race, talking about violence and tragedy. But I’m going to need some time to figure out what to say, or what to ask. This year, I’m teaching a class for the first time, a social justice themed English class for sophomores. The plan in our program is for me to “loop” with these students through all three of their remaining years in high school. With a three-year timeline, I’m optimistic that we can dig deeply into many aspects of social justice, and explore ways to help bring it about. I wish I could be optimistic that tragic examples of social injustice, racism, and violence might become less frequent within that same timeline. Moving forward, I find myself trying to hold on to these contradictory ideas simultaneously: social justice education and organizing efforts require a sense of urgency to demand change now, accompanied by a long-term vision of change across generations, not jeopardized by renewed pain and grief the seemingly-inevitable-next time this happens.

I wrote this post largely for the catharsis. I welcome comments, though if you have more time to spare, please read what these other educators have to say:

Rafranz Davis: Another Night, Another Shooting

Tamara Russell: What Do We Do Next?

Nate Bowling: A Syllabus for Students When Dealing with Law Enforcement

Sabrina Joy Stevens: too great a burden to bear