This post originally appeared at my EdWeek Teacher blog, Road Trips in Education, on Nov. 26, 2014. 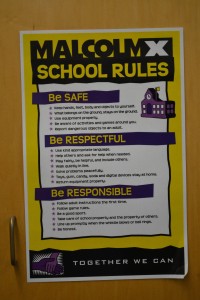 A new network will help California educators identify and use resources designed to improve school discipline policies and procedures. The network will be sponsored by EdSource, a highly respected educational policy organization offering comprehensive and balanced reporting, research, and analysis relating to public education in California.

The announcement comes in a multi-year period of increased attention to school discipline policies that produce high rates of suspension and expulsion, especially “zero-tolerance” policies; it’s particularly important to address the issue because existing policies disproportionately affect students of color. An EdWeek article from January detailed new discipline policy guidance from the U.S. Departments of Education and Justice. The article stated in part:

“Schools are required under the laws to consider whether their student discipline policies are drafted and implemented fairly and consistently and whether they may have a ‘disparate impact’ on certain student groups, the guidance says. “Higher rates of suspensions and expulsions among certain student groups cannot be explained away by assuming higher rates of misbehavior among those students, U. S. Attorney General Eric Holder and U.S. Secretary of Education Arne Duncan said.”

While I’d agree that there’s a need for schools and teachers to examine their practices and biases, I worry that many systems are not yet inclined or equipped to undertake the deep self-analysis that would truly improve learning for students who require behavioral support or discipline. There are restorative justice approaches that have shown promising results, but I don’t think they can be implemented rapidly, without sufficient training and buy-in from the educators asked to undertake the work.

Let’s consider Los Angeles. LAUSD actually took a dramatic step to change disciplinary policies in May of 2013, when the district banned suspensions that fell under the ambiguous cause “willful defiance.” Sure enough, the number of suspensions dropped considerably. But if you read the linked articles, you’ll find that there’s no assurance that educational outcomes are actually better as a result.

If the goal is to change the numbers so that the statistics are no longer embarrassing, or potential fodder for a civil rights lawsuit, that’s actually the easy work. Teachers I’ve talked to in LAUSD say that their experience is simply that principals no longer suspend students, though behavioral problems remain, or increase. Some parents have alleged that children are subject to a de facto suspension that just isn’t official. But the numbers look good. Problem solved. Superintendent Deasy made much of the decline in suspensions to defend his job performance, and later to claim successes when he left his position.

Consider what LAUSD teachers have been through in recent years, living and working the crucible of California education reform: contract negotiations dragging on through years salary stagnation, school reconstitutions, the iPad fiasco, a district-wide student record-keeping meltdown, the addition of breakfast service in classrooms, legal fights over the release of student test scores linked to teacher ratings, all playing out amid changes in standards and testing, in a vast district managing a confusing array of traditional, charter, and magnet school options. Adding one more challenging mandate to this mix of conditions simply amplifies the need for some calm and stability in order to make significant and sustainable progress on any front.

On the issue of discipline, the teachers I’ve talked to said their schools haven’t received additional training, resources, or personnel to address the underlying causes of suspensions. The school environment hasn’t improved; if anything, it has deteriorated. These are veteran teachers with longstanding relationships with their schools and communities. They are sensitive to the racial disparities and open to changing practices, but the short term decision to simply drive down suspensions without other supports in place hasn’t really helped. With all of the struggles in LAUSD, it’s hard to foresee a successful effort to address these issues systemwide, in ways that truly help address the causes and reduce the recurrence of suspendable behaviors.

At the risk of over-generalizing, I’ll pull out this encouraging example from the L.A. Times (also linked above), citing an example of a principal who did receive resources to mitigate the suspension problem at her school:

“The extra help appears to have made a difference. According to school data, incidents involving student misbehavior declined from 1,035 in the last school year [2012-13] to 663 as of May of [2013-14]. And although most of the misbehavior was serious enough to warrant suspensions, Gompers made a greater effort to address it in alternative ways, reducing the suspension rate to 3% from 30% last year.”

Pulling back to view the issue at a statewide level, I’m encouraged to see the new project from EdSource, establishing a network to help school districts help each other address school discipline. The November 24 announcement regarding this network stated:

“The initiative was inspired by a widespread feeling that the voice of educators has not been sufficiently heard in debates and discussions regarding school discipline at a state and national level. Too often in policy discussions and decision-making regarding school discipline, the perspectives of educators themselves are not given sufficient prominence.

“The network will encourage a range of strategies and approaches, in recognition of the fact that a ‘one-size-fits-all’ approach will not work for California’s nearly 1,000 school districts. Instead, the network will seek to connect superintendents, principals and teachers with a range of tools and models for implementing effective and prevention-oriented approaches that promote positive behavior.”

So perhaps there’s hope that more schools and districts can get this right. I don’t know anyone who wants to see high rates of suspensions and expulsions. However, school personnel need sufficient time, training, and resources to better support students, and to alter their own systemic practices. We can’t expect rapid, heavy-handed, top-down mandates to accomplish more than superficial changes, generating the numbers to demonstrate compliance. I’m encouraged that this new network pulls people into dialogue, and will offer suggestions and resources that acknowledge the complex and diverse settings in which changing approaches to discipline need to develop.

California educators interested in joining this effort, or seeing who’s already leading it, should look at this additional information on the EdSource school discipline newtork.