Each time I visit a school for my California education writing project, I’ll post a picture or two, and a few highlights. If you subscribe to this blog, or my EdWeek Teacher blog, you can read the posts where I get into deeper discussion about what I’m seeing and learning on my journey! 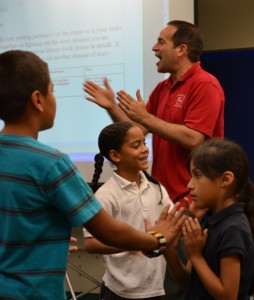 It was a remarkably clear morning in Pasadena, considering there was no wind and a forecast high above 90 degrees. I arrived at Cleveland Elementary as the temperature was already creeping up, and found my way to the 3rd grade classroom of Dave Berk. I’ve known for several years through his advocacy for National Board Certification and his involvement in CTA and NEA. In fact, one of the reasons I admire Dave is his effort to promote National Board Certification within NEA. As a National Board Certified Teacher (NBCT), I would expect that any time I visit an NBCT in the classroom, I’d see a practitioner who knows students, the subject matter, how to teach, how to improve learning and teaching, and how to engage with parents, the community, and other professionals. Dave showed all of those traits today.

I arrived at the very beginning of class and saw Dave interacting with some parents who had come to him with questions. Even in cases where there was a language barrier, Dave communicated his gratitude for the parents who came to talk to him, and was glad to explain in person papers that had been sent home earlier. From time to time during the day, Dave was able to feed me quick insights into what I was seeing, and knew plenty of relevant information about students and their lives. His interactions with fellow staff members also showed his work with adults to look out for kids.

What struck me most about his teaching wasn’t the particular reading or writing or art instruction that I saw, but rather, his skillful classroom management. I’m always in awe of elementary school teachers who are able to come up with clear, simple, reasonable guidelines and procedures, and then carry them out with great consistency without losing the flow of a lesson. I was sitting close to the action in his relatively small classroom of 22 students, and had a pretty good view of students most of the time, and he kept picking up on clues that I missed regarding students who needed to be redirected or helped with their focus and engagement. He was strict, but effective and respectful. Students never questioned or complained, and his quick, quiet interventions always seemed to have the desired effect on the individual and the class overall. 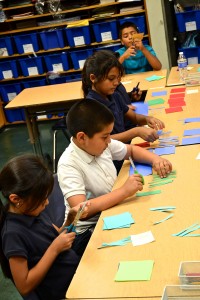 Intense concentration and effort were the norm in Dave Berk’s class.

I could also see that Dave’s students were trying hard, and wanted to do well. They persevered through difficult tasks, tackling the addition of triple-digit addends, even when some of them needed to double-check themselves by counting on fingers, even when double-checking showed an error.

The other part of Dave’s classroom management that I liked was his use of music and dancing to break up the lessons. Four times during the day, Dave added a rhyme, a song, or a familiar dance to a transition. Maybe you know the Chicken Dance? Gestures of a beak, wings, and tail feathers, then four quick claps? That was just one example, but every time, every student participated, and without a trace of self-consciousness. Why not? Their teacher was providing great modeling. After a few minutes of this break that gave students a chance to move, relax a bit, and act silly, Dave would have them freeze in a particular position with their fingers intertwined and held chest high, with elbows at their side. So right after the fun activity that provides a physical break, the students are still, focused, and ready to move on. His handling of third-grader energy and focus seems to justify the activity for me, but then Dave told me there’s more to it; he began describing the relationship between physical coordination, spatial awareness, and brain development for learning. So what looks like fun and games to the casual observer is actually quite well thought out, and with potential benefits that might not be apparent or immediately realized, but certainly worth supporting.

All in all, Dave Berk’s third-graders have some great moves – and look to be moving on up under the thoughtful and deliberate guidance of a caring teacher.

Dave also invited me to sit in for a staff meeting at the end of the day, and his principal and colleagues were kind enough to welcome me. They seem like a positive and cohesive group, but I lucked out even further as the district superintendent and some of the district administrators were also present.

The superintendent, Brian McDonald, came to solicit feedback on district practices. This kind of task could of course have been accomplished online rather than in person, but I think the personal touch provides an example of where short term efficiency is not the same as long-term effectiveness. Of course, the information the teachers shared might be identical in either format, but when the Superintendent personally takes notecards and reads them, that sends a clear message that the input is actually being solicited and read by the superintendent himself. Building trust and relationships will likely pay off in ways that mere efficiency would not.

The other reason for district personnel to visit the school was to talk about Farm to School, a grant program administered by the USDA. The program helps students learn science and nutrition by studying and working in a school garden, raising edible plants – and then eating them – provided they follow some pretty strict guidelines! It’s a win-win-win situation – good for the school’s water consumption if they replace lawns, good for student learning, and good for student health.

To support my travels and writing, I’m running a Kickstarter campaign through October 22, 2014. Please take a look at the campaign page and video, and consider a pledge that will support the work and also allow me to send you the book I’ll be writing next year!