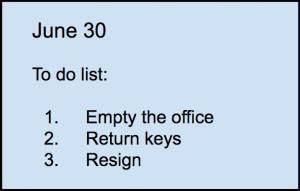 It is July 1, and Carol Burris is no longer a high school principal.

Her resignation became public in this open letter at The Hechinger Report. It reads in part:

It is principals’ day-to-day supervision of instruction that helps teachers improve. Teachers feel responsible when they know that their principal expects them to do their best, and in return we principals give nothing but the best of ourselves.

All year long I struggled with the thought of retirement, changing when that time might come on almost a daily basis. Every time I thought about writing my letter of resignation I would pull back. In the end, I decided that the new evaluation system [in New York] was one in which I could not, in good conscience, participate.

June 30th will be my last day as principal…. I will continue to fight for our public school children and the profession that I love from outside the system.

Self-styled education “reformers” who don’t know how to teach or lead schools should have been taking notes and gathering insights from a reformer of Burris’s caliber. They talk about raising standards, they talk about equity, and they talk about accountability. Carol Burris has done it all, has walked that walk, for years. I first learned about Burris seven years ago, when she co-authored the book Detracking for Excellence and Equity. I devoured that book and hoped its lessons would be widely studied. Her high school eliminated tracking in all classes in grades 9-10 and raised all measures of student learning and success for all student subgroups in grades 11-12. They didn’t have to fire any teachers. They didn’t need outside pressure or Common Core. They didn’t teach to the test and they didn’t cheat. When my own department examined our tracking practices and advocated detracking for ninth grade English classes, Burris was kind enough to answer questions I emailed, and offered her encouragement for our efforts.

Burris was a highly-regarded instructional leader on Long Island, and was honored by her peers as the 2013 New York State Principal of the Year. As value-added measures, flawed teacher evaluations, and Common Core implementation eroded the quality of education in New York, she started speaking out and writing about the problems she saw. She spearheaded a group of New York principals who stepped up to defend teachers and public schools as her state’s leaders continued to ignore research and common sense, not to mention ignoring teachers, parents, and administrators. Eventually, one-third of all the principals in New York State, over 1,500 of them, signed on to a letter protesting state policies, and offering a considerable body of research undermining the state’s proposals.

No one can say Carol Burris was against standards, against accountability, or afraid of scrutiny in her own practices. They certainly can’t say she wasn’t outstanding at her job. Her resignation is the latest of its type – educators who’ve had enough of being controlled and even intimidated by legislators, state officials, and a well-resourced punditocracy. Those with power and control over policies espouse a commitment to students and accountability, but have so far evaded accountability for the harm done to schools and students, teachers and the teaching profession. They claim to value teachers but barely conceal their disdain for us when we speak out through our unions.

Carol Burris’s departure is a loss for her school and community, and for the ranks of school administrators. Her leadership on issues that matter deeply has been felt far beyond her school, and I hope her influence spreads as she carries on the fight for education equity and excellence in these challenging times.