The Education Department put out a press release today signaling a noteworthy shift in their education policies pertaining to standardized testing; it looks like the kind of change many of us have been calling for throughout the Obama-Duncan administration. It looks like vindication for California’s education policies and leaders. 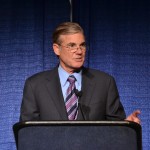 Governor Jerry Brown, State Superintendent Tom Torlakson, and the State Board of Education under its President Mike Kirst have helped the state find ways to de-emphasize test scores for school accountability, avoid using test scores for teacher evaluation in most cases, and eliminate double-testing at a time of transition between testing and accountability systems. At the time, Secretary Duncan and various education “reform” leaders criticized California’s approach. Will they temper or withdraw some of those objections now?

AFT President Randi Weingarten offered this reaction in a mass email: “It’s a big deal that the president and the secretaries of education—both current and future—are saying that they get it and are pledging to address the fixation on testing in tangible ways. Yes, the devil is in the details, but today it’s clear: Parents, students and educators, your voice matters and you were heard.” 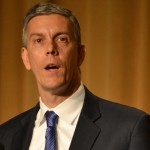 The timing of this announcement is interesting. Arne Duncan has announced he’s stepping down as the Secretary of Education. It seemed like he championed the use of standardized test data at virtually every step, for every purpose. The obscene malpractice that resulted in gung-ho education-reforming states like New York and Florida didn’t seem to make a dent in Duncan’s approach – until now, perhaps. Duncan’s successor, John King, is every bit as associated with this kind of test-obsessed accountability from his time as the Chancellor in New York. Maybe we’ll find out more later about who within the administration pressed for these changes at this time.

Here’s a U.S. News article about the announcement.

Here are a few choice quotations from the press release, which you can and should read in its entirety:

I’m cautiously optimistic, and want to give the Education Department credit for admitting mistakes and proposing solutions. There’s still a chance that this mostly turns out to be minor, cosmetic changes applied to policies that remain at their core dedicated to the same basic idea that we need test scores as the ultimate objective measure of success, as the lever for policy, as the justification for threatening lower-performing institutions and scaring them into improvement. What do you think?