In the 1999-2000 school year, I was teaching 9th and 10th grade English at Mission San Jose High School in Fremont, California. Among my students, there was a freshman named Stephanie Smith. It was evident that she enjoyed the class, and school in general. She worked hard, always gave her best effort, and had positive effect on everyone around her. The following year, though she was not in my class, she made an effort to keep in touch, and eventually came to interview me for a project that was part of her new English class. The assignment was to learn about a potential career, and she came to me to discuss becoming an English teacher.

At the time, I was quite enthusiastic about teaching, and recommended it without concerns or caveats. I was optimistic about the direction of education (prior to No Child Left Behind). The state and national economy looked strong as the dot-com bubble had yet to burst, and California seemed headed in the right direction politically even if George W. Bush had just defeated Al Gore (and Ralph Nader). I told Stephanie that for as long as she saw herself as a potential future teacher, I would gladly offer any assistance and encouragement that I could.

Fast forward fourteen years, and here you see Stephanie, now an established English teacher at La Quinta High School, south of Palm Springs. It’s been a pleasure to keep in touch with her over the years, but we hadn’t seen each other in person for close to a decade. While at first it was surreal to be in her company and see her interact with teachers as a peer, and with students as a teacher, I adjusted and was able to begin observing more thoughtfully. Stephanie’s personality in the classroom seems so authentic and caring. It’s clear that she cares about her students and makes an effort to know them, and to help them succeed. I suppose that with time I may forget the content of the lessons she taught that day, but I was left with a clear and lasting impression of her commitment to listen to students. More than once she told me how important it was to her to be fully present for them, to be friendly, engaged, and supportive. Stephanie made the most of every minute with students, and it was clear that they respect her and relate to her. 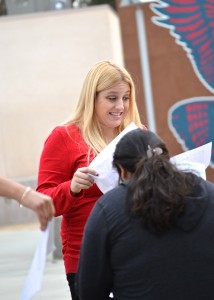 In the photos above and to the right, Stephanie was helping students prepare their performances of A Midsummer Night’s Dream. With a background in both drama and English, Stephanie has been able to structure the study of the play and the performance piece in a way that generates enthusiasm and buy-in among students, as they understand why they’re doing what they’re doing. I saw students really wrestling with the text and working on their collective interpretation of the characters and scenes.

My year off from teaching has brought me to a variety of places and schools, into the classrooms of some memorable, outstanding teachers. However, seeing my former student as a teacher was an experience that won’t be rivaled in this journey, and maybe never repeated in my life. I’m grateful to Stephanie Smith for the privilege of seeing the actualization of something we both imagined long ago.

[EDIT 1/5/15: Stephanie’s school has some wonderful career technical education facilities and resources – you have to see these pictures.]

6 thoughts on “The Student Becomes the Teacher”