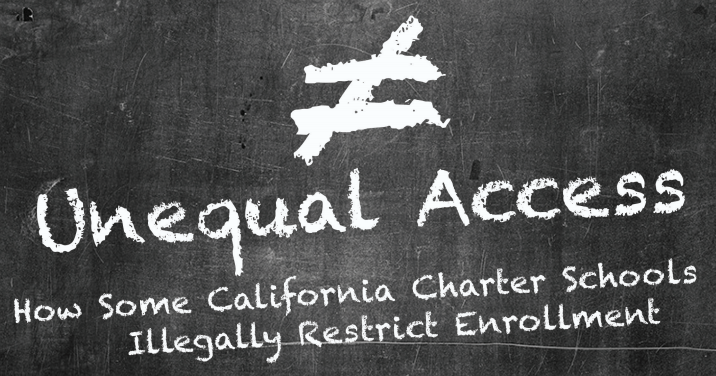 This report, titled “Unequal Access: How Some California Charter Schools Illegally Restrict Enrollment,” was produced on the basis of publicly available materials from roughly 1,000 charter schools – meaning there are likely more charter schools engaged in selective practices that are not documented. The report also notes national trends involving practices that may have a selective effect but were outside the scope of this study. These include: “applications made available just a few hours each year; lengthy application forms, often printed only in English; barriers based on disciplinary records; requiring teacher or other recommendations; medical records requirements; assessment exams; requiring documentation of a disability; and requirements about students’ behavior at home.” (For more, the report suggests this Stephanie Simon article).

These policies are symptoms of a broader problem. Charter schools have grown to become an industry unto themselves – even a source of investment income for some – and a drain upon the public school system. In order to compete, charters have to differentiate themselves, and for many, that means taking steps that make them factually or apparently more exclusive or higher achieving.

Charter school organizations and advocates make some bold claims and promises about the superiority of their schools as a whole. They are sensitive to criticisms, and have ways to explain away the increased segregation caused by charters, using the broadest of statistics to suggest their diversity.

Charters claim the mantle of “public schools” because they are publicly financed to serve the public. However, they are not operated transparently, not willing to play by the same rules as public employers, and not willing to educate all students – the most essential part of the mission of public education. I’m speaking here of charter schools broadly, as an entire sector. There are some outstanding charter schools that fill a real need, take everyone, and are transparently operated. Others are part of predatory looking for opportunities to expand their brand by seizing upon weaknesses in the public system.

I recognize the appeal of choice; we need to build choice into our districts and existing public schools, instead of allowing outside organizations to come in, set up an unfair competition, and drain resources away from public school systems already struggling to make do with their current funding and facilities.

What gives particular urgency to the charter school issue is that all too often, schools are set up to compete with each other by our state governments, with the encouragement of federal “accountability” policies. It may not be exclusively an American tendency, but it is not a universally accepted idea that we need to grade, rate, and rank schools against each other. If charters come along, skim a certain higher performing subset of students away, and then life goes on with both schools receiving all the resources they need, that would be one thing. However, in reality, if charters pull away students who outperform their peers who stay, they make the district schools appear to be struggling even more, setting off a series of negative consequences.

The report has some specific suggestions for advocacy and reform, well worth a look. Interestingly, the NAACP quite recently came up with suggestions of its own regarding charter schools, and called for a moratorium to stop authorizing new charters. The charter industry has successfully convinced many people that they are key players in the advancement of quality education as a civil right, and they’re spending millions in the current California election season to protect and build upon their gains. Those of us who believe in strong public education for every student, not pitting school-against-school to compete for students and resources, must be informed about the issues, and vigilant at election time and beyond.