Writing in the December 2015 edition of The Atlantic, Hanna Rosin takes a look at teen suicide in Palo Alto, where I live and teach. The anticipation of the article has been with us for quite a while here in the school district and town, and now the article is online. I’ve already been asked about Rosin’s article, and have a few thoughts to share.

If you want the quick take, based on one reading of the article, I think Rosin strikes an effective balance between the search for contributing causes, and the acknowledgment that there are no simple answers or solutions. 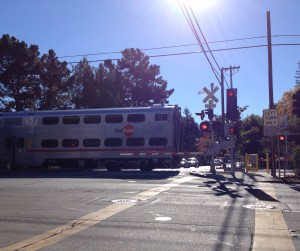 Everything about the article hits close to home. I live two blocks away from the train tracks, and like one of the families in the article, I hear the bells at the crossing every day and night. I work at one high school and I’m a parent at the other. One of my students died by suicide in 2003, and I know several of the teachers, administrators, and former students mentioned or interviewed in the article – though there was information here I didn’t know about before.

My first concern reading the article was how fairly and accurately these people, and our schools and community, would be represented. I can’t speak for anyone else of course, so we’ll have to see if they have any response, but in terms of what I know personally, the article seems accurate and fair. My second concern was whether or not the article would oversimplify or sensationalize the topic. On that score, I think Rosin clearly avoids oversimplification, providing some interesting research and data to contextualize the issues and also pointing out significant differences among the various cases. Is it sensationalized? Not really, though naturally, when you choose to focus on a topic and a group of people, there are others that are excluded, that are out of view – in this case, the many students and families that are not living the lifestyle and fitting the patterns described in the article.

The most useful parts of the article for me were those that focused on research concerning risks for children in affluent families. For example: “[Suniya Luthar’s] research suggests a U‑shaped curve in pathologies among children, by class. At each extreme—poor and rich—kids are showing unusually high rates of dysfunction. On the surface, the rich kids seem to be thriving. They have cars, nice clothes, good grades, easy access to health care, and, on paper, excellent prospects. But many of them are not navigating adolescence successfully.” The article goes on to detail some of the evidence, and some of that evidence implies its own solution, in terms of how we prioritize time and transmit values. “The kids in the affluent communities [Luthar] studied felt their parents to be no more available to them, either emotionally or physically, than the kids in severe poverty did.”

However, recognizing this potential issue in our community does not mean we’ve identified the cause and solution to teen suicide. These are problems worth addressing for their own sake and for the general wellbeing of the students and families. It does not follow that there is always an identifiable cause in a suicide. So I was also glad Rosin included this quote from Kathleen Blanchard, who has spoken about suicide at multiple community events since the death of her son in 2009. Rosin relates an interaction at a community meeting where Blanchard told audience members that teens “are not robots. You can’t break them open and find the broken circuit. It’s so complicated. There is so much you don’t know, and you are never going to know … We are not going to have ‘the answer.’ We will just do our best” (emphasis added).

Other thoughts about the editorial choices:

The article’s title is “The Silicon Valley Suicides: Why are so many kids with bright prospects killing themselves in Palo Alto?” The latter portion of that title, with the phrase “so many,” may be justified by the statistics in one sense (“The 10-year suicide rate for the two high schools is between four and five times the national average”), but in that same time period, we’ve taught tens of thousands of students.

The photo at the top of the article has generated some objections; it shows an Asian male sitting on the edge of a bed with his face in his hands. (At least, the physical features we can see suggest an Asian male, though we can’t be sure). The article addresses ethnic and cultural issues that have come up in the community, so the picture has some basis in the article, but it strikes me as a situation that calls for a more neutral choice, if for no other reason than simply to remove a potential distractor.

The Atlantic also provides a video in which Hanna Rosin discusses, among other topics, the research behind the article, and why she felt it needed to be written.