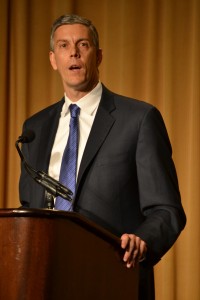 Arne Duncan’s policies face a challenge in the current debates around ESEA reauthorization.

With debate heating up regarding the potential reauthorization of Elementary and Secondary Education Act (ESEA), more recently branded “No Child Left Behind” or NCLB, there are opinions flying regarding the federal role in education policy. At EdWeek, Rick Hess just posted an interesting piece regarding political “cover” in education policy, and whether or not we need strong federal rules and incentives in order to do improve education. I think his insights there are pretty sharp overall. Here’s a sample to give you the main ideas, but I hope you’ll go read the whole post.

[NCLB] waivers led to the rushed adoption of not-ready-for-prime-time teacher evaluation systems and NCLB led to a hurried reliance on poorly designed accountability systems and problematic school improvement strategies. Federal “cover” can push states to do things, but hurried adoption on a politically driven timeline means they’ll be done poorly in lots of places, undermining public confidence and support.

…[The] very act of providing federal “cover” can also serve to undermine local backing, or cause it to atrophy, by making it seem less necessary or urgent.

Taking the contrary view, Peter Cunningham left a comment on Hess’s post. Cunningham is the former Assistant Secretary for Communications and Outreach in the U.S. Department of Education, and current executive director of Education Post. His response read in part, ”

“Cover” is just another word for “pressure to get better” — and without it you won’t have systemic change. What union leader will sign on to eval without some pressure, even though most of them agreed that the system of eval was broken?

Without pressure, what state would have disaggregated testing data?

Without cover, what district would take bold steps to turn around underperforming schools?

Without pressure, many states will continue to underfund education and will never invest in early learning, etc.

And what follows is my response to Cunningham:

Peter, your argument regarding the role and importance of pressure has some merit, especially regarding disaggregated data and investment in education. There are some basic steps like that where federal policies and pressure can help. But on policies that get more prescriptive, I don’t think you’ve really addressed Rick’s arguments that “cover” is likely to produce compliance more than effective, lasting reform. You may have been looking at this from the governmental level too long. At the local level, where we actually do the work, most people actually do have motivation to improve. If you’ve read up on motivation, you know that people working on complex tasks that matter to them are driven by three motivators: autonomy, mastery, and purpose. When policies at any level pave the way for people to work with more autonomy, more mastery, and greater sense of purpose, they are more likely to succeed.

The fundamental disconnect of “accountability” in the past 15 years has been creating policies that undermine all three. Even in your comment, there’s an assumption that people aren’t motivated unless there’s a punishment for non-compliance. But as you know, some progressive unions have been ahead of that curve for decades, using good labor-management relations and a sense of mutual accountability to improve evaluation and remediation. Or, take my least favorite example of federal failure: promoting the use of test scores in teacher evaluation. Imposing it undermines state and local autonomy. It also undermines teaching mastery because, as ample research has demonstrated, test scores are slippery measures and there’s not always a clear connection between teacher practice and test score results for a given student, class, or grade level. Instead, teachers are stressed and frustrated.