This post originally appeared on Capturing the Spark, at EdWeek Teacher, 12/21/15.

In my previous blog post on this topic, I discussed the concept of decision quality, a useful set of criteria for evaluating a challenging decision at the time it’s being made. It’s a tool that can be useful for students analyzing decisions studied in various academic disciplines, and it can be applied to decisions in their own lives. Similarly, I’ve found it useful as a teacher seeking to engage sophomores in my English class in complex and detail-oriented analysis of a non-fiction text, and also tried to apply the same principles professionally and personally. (Learn more at the Decision Education Foundation).

In this post, I aim to look a bit more deeply at a few of the criteria in decision quality, to see what we can learn about the decision process as it affects the climate in our schools and classrooms. The particular issue I selected concerns efforts to reduce or eliminate suspensions in schools. Suspensions have always been a problematic kind of discipline. If a student commits an infraction serious enough to warrant a suspension, it’s generally a situation where the student would benefit from additional support, counseling, intervention, and closer monitoring. Sending those students out of school for days at a time means less access to support and academic instruction, along with greater probabilities of dropping out and ending up incarcerated. Suspension is a consequence disproportionately harming students of color, and has deservedly drawn the critical attention of the U.S. Departments of Education and Justice.

With increased attention to these problems, policy makers reacted. In my home state of California, several large districts banned suspensions for “willful defiance” – a term that gave teachers and administrators broad lattitude in using suspensions for discipline; the state itself followed suit shortly thereafter. EdWeek noted that Governor Brown had previously vetoed a similar bill, citing the need to respect local decision-making.

How has it worked out? Some veteran LAUSD secondary school teachers I know told me some disturbing stories about the effect on school climate. These were not teachers who want to give out suspensions; they agree that schools need to change and they appreciate the goals behind this policy shift. Their anecdotal observations shared with me last year are echoed in more recent news items about LAUSD campuses in the aftermath of this decision. Restorative justice has been touted as an alternative approach to meet the actual needs of students rather than push them out the door, but a new program of this magnitude is difficult to implement with much expediency in a district the size of LAUSD.

Once again, the six elements of quality decision-making are: 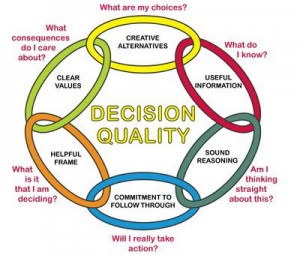 Recognizing the limitations and risks of analyzing a decision I was not part of, I still have some thoughts about what we’re seeing here. Looking back at the local and state policy decisions regarding suspensions, I expect the key areas of improvement would be in the first and last elements.

What were policymakers deciding-what was their frame? My guess is that they were deciding to reduce suspensions; they primarly wanted to alter a specific outcome, not craft an effective educational process. And if you’re a policy maker, or an administrator answering to policy makers, altering the outcome is actually pretty easy to do. They did it. Just remove the policies that allow suspensions, and stop suspending students whenever possible. Or if you do something like suspension, don’t call it suspension. What should policy makers have been deciding? I’d suggest that had their decision frame focused more on the causes of suspension, and the prevention of recurring behaviors that lead to suspension, they would have had a better result. A slower result, too. Maybe too slow for politics. But then again, what do they have now? A rapidly implemented policy, mixed success (at best), and years of remaining work that appears to be ineffectively planned and scheduled.

What was the commitment to follow through? As I noted in my last blog post, it’s important to consider if you’re making a decision to do something, or a decsion to make other people do something. Since the policy makers are not the ones involved in running classrooms or schools, not making the call regarding suspensions, all they can do is commit other people to implement the decision. In such a case, it’s not surprising that a new policy faces these implementation hurdles. Interim and soon-retiring-again Superintendent Ramon Cortines told the L.A. Times:

“You cannot piecemeal this kind of thing and think it is going to have the impact that it should have. Don’t make a political statement and then don’t have the wherewithal to back it up.”

Maybe that should be added to the criteria for decision quality: is this a political statement? And if the answer is yes, the other decision quality factors probably are all that much more essential to consider. Yes, we do need political statements that we will no longer tolerate harsh disciplinary policies with severe consequences disporportionately harming students of color-but if such statements are the strongest part of your decision-making in education policy, we’re unlikely to see the results we all want.

2 thoughts on “Clarity in Decisions”