This post originally appeared at “Road Trips in Education” at EdWeek Teacher on May 13, 2015. 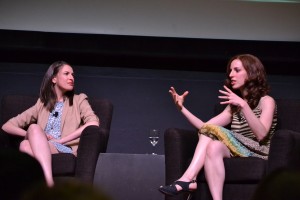 In a recent blog post, I shared some of the content of remarks by Dana Goldstein and Elizabeth Green on the topic of “Reimagining the Teaching Profession,” speaking at event with that name, presented by the Graduate School of Education at Stanford University last Thursday, May 7. Following their individual remarks, they participated in a conversation moderated by Professor Linda Darling-Hammond, the highlights of which are posted here. It was an engaging event and thoughtful conversation, though I couldn’t say it entirely lived up to its title. I did enjoy the event and found it useful for understanding the context in which we currently operate, but I would have liked more details and concrete suggestions about how the profession itself might change in the future. Also worth noting – it was another event talking about teachers, without a teacher on the stage.

As for the dialogue, Darling-Hammond posed the first question to Goldstein, regarding the title of her book: have “The Teacher Wars” changed recently? Goldstein suggested that the assault on teaching does seem to show signs of subsiding, but warned that it has always been cyclical. While there are many people who now recognize the errors of No Child Left Behind other recent (unspecified) reform excesses, the question now is whether or not we can craft new approaches to improving teaching before the next reversal of the pendulum. Green added that some tension will always remain as we look for a balance between top-down management of teaching, and more autonomous, exploratory teaching. Darling-Hammond pointed out that the best forms of learning through exploration are actually well-structured by expert teachers to ensure that the exploration leads to learning, and added that teachers must have strong content knowledge to pull that off.

A subsequent question regarding the “theory of change” for public education allowed Green to expand on an idea from her earlier remarks. In her book, Building a Better Teacher, she addresses the “infrastructure” of teaching and schools – meaning not only traditional services that receive that title (facilities, equipment, technology, transportation, etc.) but also the staffing, instruction, and methods of teaching, and professional training and development. The challenge of building a coherent and robust infrastructure are linked to the lack of a coherent governance structure in American education. Most countries have more centralized educational systems. We have a limited federal role, state oversight, and varying degrees of county, district, and site-level autonomy; the resulting system is so fractured that effective infrastructure is hard to establish. The lack of coherence opens the door for some people to suggest we should simply blow up the existing structure and rely more on independent schools, charter schools and networks, vouchers, and market-driven solutions.

Goldstein flipped the script and directed a question to Darling-Hammond regarding international comparisons that often lead us to discuss Finland, Singapore, Japan, but rarely Canada – and why not? After all, Goldstein pointed out, Canada has similarities in language, government, and immigrant populations, and they’ve succeeded in areas where the U.S. struggles. Darling-Hammond replied with a hint of humor, “I don’t think they want much attention from us,” meaning that Canada might have concerns about some of the worse aspects of American education reform taking root in their system. Addressing the question more directly, Darling-Hammond suggested that one of the key lessons we might take away from Canada is that education is less political there, with stable funding and a strong commitment to teacher preparation maintained even when there are shifts in partisan political leadership.

As prologue to her next question, Darling-Hammond pointed out that we know so much about the relatively modest effects of teachers relative to other factors that shape children’s lives; she then asked if our high expectations for teachers are “setting them up for failure.” Goldstein replied that we do need to be realistic about what teachers and schools can accomplish, then added “not having high expectations is bad alternative.” Green advised that we should watch out for politicians and advocates who misunderstand or intentionally misstate research to make arguments about teaching, noting that President Obama has suggested that teachers have the power to close the nation’s wealth gap.

Darling-Hammond, who advised Obama on education policy prior to his election, (only to emerge disappointed by most of what followed in his administration) asked what advice the next president should heed. Goldstein said that it would be helpful to expend more energy looking beyond teaching. She then took as her evidence two studies in which Harvard economist Raj Chetty was among the investigators and authors. One study released a few years ago, and much debated in education reform circles, showed a correlation between effective teachers (based on value-added measures) and very modest but measurable gains in outcomes like future education, teen pregnancy, and income. The more recent research shows the much more powerful effects of neighborhoods and mobility, with much higher shifts in future earnings for children who move from poorer, more segregated communities to more integrated, middle-class communities; at a glance, Goldstein suggested, community may have 30 times the effect of a teacher, so focusing on relevant social and economic policies might be more impactful for a president willing to “look at big picture.” Adding on to Goldstein’s point, Darling-Hammond mentioned findings released in 2014 by the National Bureau of Economic Research; (I pulled this quote from EdWeek, however): “In districts that substantially increased their spending as the result of court-ordered changes in school finance, low-income children were significantly more likely to graduate from high school, earn livable wages, and avoid poverty in adulthood.”

Finally, I was glad to hear Elizabeth Green mention the “This too shall pass” phenomenon: teachers are skeptical of many (most?) efforts at reform, because so much of it doesn’t speak to their professional experiences, doesn’t work in their context, wasn’t chosen or developed by them. While there’s an element of self-fulfilling prophecy at work here, it is also widely understood that top-down solutions are harder to sell, harder to implement, and harder to align with needs, compared to the solutions that people in a group might generate when they have appropriate levels of agency, autonomy, and authority to develop and guide the work of improvement. In order for any “reimagining of the profession” to be effective and sustainable, teachers must be not only part of the dialogue, but leading the resulting efforts at change.

One thought on “Reimagining Teaching: A Dialogue Continued”